Ultimate 16-inch MacBook Pro deal roundup: up to $600 off, plus AppleCare discount & 5% back

Apple is researching a wireless optical communication system for mobile devices, that uses auto-targeting to precisely line up how a laser lines up with a sensor for the best transfer speeds.

Mobile device users have a multitude of ways to send files and contacts between devices, with the current systems typically relying on radio-based technologies, including Wi-Fi and Bluetooth. Optical systems are generally benefit to have a higher potential transfer speed compared to radio, but they are not typically used in modern products like the iPhone 11.

While older technologies like the early infrared-based transmission systems showed promise before Wi-Fi and Bluetooth fully established themselves, there were many issues that made optical systems difficult to use. The need to keep the devices close together and their emitters and sensors lined up sometimes made it fiddly to establish a decent connection between hardware.

There is also the possibility for such signals to be detected by third parties, observing the unfiltered emitting of light that is usually unrestricted by direction.

In a patent granted by the US Patent and Trademark Office on Tuesday titled “Systems and methods for adjusting movable lenses in directional free-space optical communication systems for portable electronic devices,” Apple outlines the combination of a laser diode and a photodiode in an optical system.

By using a laser, Apple improves security by severely limiting the broadcast directions of the light emitter to a very narrow field, keeping communications between devices within a specific directional range.

The laser’s output could be put through a lens, which moves to change its direction.

To solve the problem of lining up devices, Apple offers the possibility of using a movable lens in front of the laser, which is used to alter its trajectory to line up perfectly with the receiving sensor. This offers the benefit of maximizing the amount of light hitting the sensor, as well as reducing the chance of missing in the first place.

For users, this saves them from the finicky process of making sure the two are lined up. While such a lens arrangement can only offer so much range of motion and so rely on being placed vaguely in the right orientation to begin with, it doesn’t fall to the user to make the positioning perfect.

To assist the lens system in lining up the laser perfectly, the system relies on the receiving sensor having multiple photosensitive segments, with each able to be broken down into multiple elements. While the system may want the laser to land right in the center of the sensor area, there is a distinct chance it will hit the border between multiple elements. 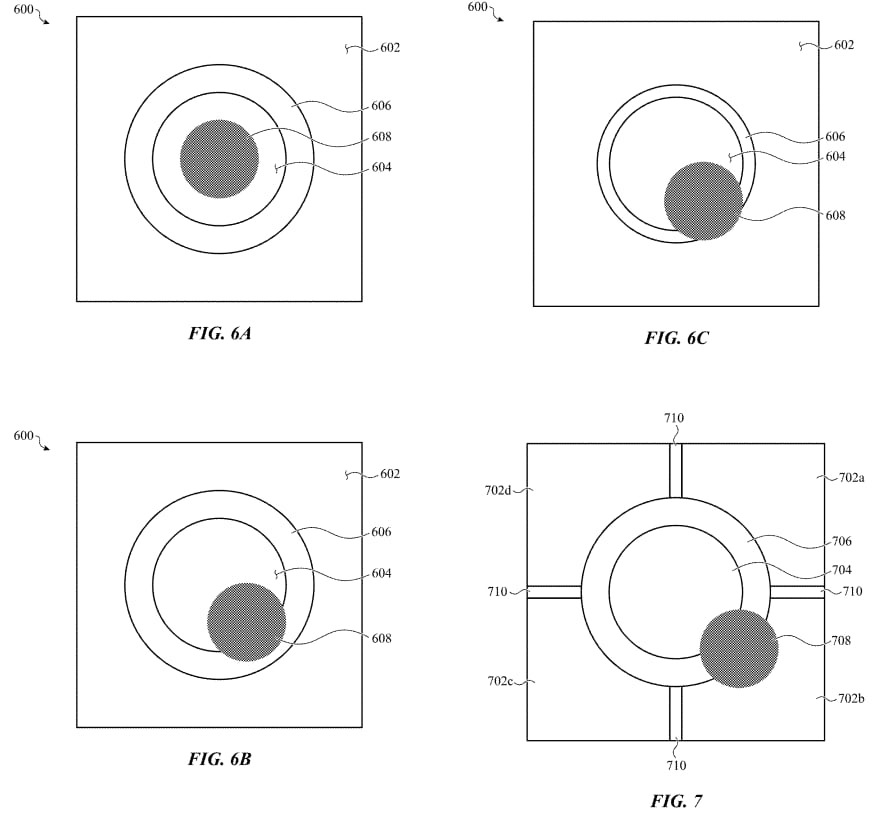 The receiving sensor could detect the landing point of the laser.

After determining where the laser is hitting the sensor area, the receiving device has the capability to send back a communication to the transmitting device of the deviation, allowing the lens to be moved to correct it. Once the laser has shifted to the perfect position, a further message can be sent advising the correction motion of the lens can cease.

The patent lists its inventors as Omid Momtahan and Tong Chen. Both appear on the connected patent application for “Device awareness in line-of-sight optical communication systems” from December 2019. That filing proposes the use of a “discovery handshake protocol” to securely find and identify other devices via light, before switching to a high-bandwidth communications system, in a bid to cut down the current device discovery times of five to ten seconds.

Apple files numerous patent applications on a weekly basis, but while the existence of a patent may indicate areas of interest for Apple’s research and development efforts, there’s no guarantee it will appear in a future product or service.

Light-based networking has been an idea that has circulated for quite some time, with the promise of high-speed connections multiple times that of current Wi-Fi networks. There have even been experiments in using light in concert with normal Wi-Fi in so-called Li-Fi systems, with data broadcast to devices via LED light bulbs illuminating a room.

There have also been some signs Apple has been exploring the possibility of using Li-Fi in the future. References to a “LiFi Capability” appeared in iOS code in 2016, suggesting it has been in development behind the scenes for quite a few years.

While the patent indicates an intention for it to used with mobile devices, there are also some applications for the technology in other fields.

A major one could be with the Apple Car, Apple’s long-rumored self-driving vehicle, which could employ something similar to power an inter-vehicle communications system that allows other self-driving cars to provide alerts on road conditions or upcoming maneuvers.